skip to main | skip to sidebar

In Gaza: No shoe nor a drop of fuel

Siege imposed on the Gaza strip has become the first concern for Palestinian citizens who live in the biggest jail ever in this world.

Those civilians are severely suffering from the Israeli collective punishment policy which influences them day and night in all life facets.- -
This black list includes thousands of raw materials and food stuff in a flagrant violation of all human laws and charters.
I took a round in Al zawya popular market mid of Gaza City where owners of shops locate. The place was so miserable and smell of garbage spreads everywhere. The shops were nearly empty either of customers or goods!
More:http://gazatoday. blogspot. com/2008/ 04/in-gaza- no-shoe-nor- drop-of-fuel- siege.html
or http://tinyurl. com/3la5fq http://freegaza. ps/english/
Posted by يوسف أبوديّة @ Yousef Abudayyeh at 6:21 PM 85 comments:

No Ambulance, Call the Radio

GAZA CITY, Apr 12 - "I am bleeding uncontrollably, I need an ambulance." That was not a call to emergency services, it was an appeal broadcast live on radio in Gaza City.

Who knows whether there will ever be an ambulance or not. But this way the ambulance services still hear the appeal broadcast on Al-Iman FM Radio Station, one of few independent radio stations in Gaza. And if the emergency services cannot help, someone else who hears the appeal might.

The ambulance dispatcher announces he cannot get the ambulance to the man. An Israeli bulldozer is blocking the road, and an Israeli tank on a hilltop has been firing at the ambulance, he says. Nobody can say if anyone else got to help the man. But at least his SOS could have been heard.

Appeals again went on air after the Friday attacks on Bureij refugee camp, where the death toll climbed to 16 by the weekend. The deaths included six children among nine people killed Friday. Again, ambulance crews confirmed they could not reach many of the injured. But the appeals were made on radio for all to hear.

A man called from east of Jabaliya refugee camp asking for an ambulance for his wife about to deliver. The radio host asked his location, and that of Israeli tanks. "I can't look from the window to see," he said. "They will shoot me if I do."

A lady called to ask an ambulance to clear the remains of a body lying on the door. IPS confirmed later that it was the body of Abdelrazek Nofal, who was 19. He was blown to bits by an Israeli tank shell.

Someone else called from Bureij asking for ambulance, and for food and water. "My mother needs to be in hospital urgently," he called the radio station to say. Another difficult mission, with the Israeli troops patrolling the area.

The appeals are heard on radio day after day. No one can say what follows the appeals in each case. But the live broadcasts on the radio can be a lifeline – or at the least, a line of hope. Where emergency services and aid agencies are not listening in, the radio then calls them.

"It brings tears to my eyes," says radio host Khaled al-Sharqawi. "I can sometimes hear shooting, and women and children screaming, asking for ambulances, and the ambulances cannot reach them."

Emergency services keep the radio on, if only to go in when it's safe to bring out bodies. On one recent mission, said Ahmed Abu Sall, who works as a volunteer medical worker, "we were shot at by an Israeli tank. Two bullets hit the wheels."

This mission succeeded, as several do. But it can be a long haul to call and wait. Often, cell phone batteries run out as people call again and again with the appeals for help.

The Palestinian Telecommunications Company has given the radio station a toll-free number. That makes calling easier, but the radio statiion has to be on guard also against mischief. Hosts do what they can to check sources and credibility before putting an appeal live on air.

Not every call is a medical crisis. "In such cases we call human rights organisations," Sharqawi told IPS. "But they usually tell us they cannot help people on the ground."

Most people working at the radio station are young volunteers. And Al-Iman isn't the only one; several other local radio stations have begun now to hear and to broadcast live appeals for help. http://www.freegaza.ps/english/
Posted by يوسف أبوديّة @ Yousef Abudayyeh at 6:26 PM 124 comments: 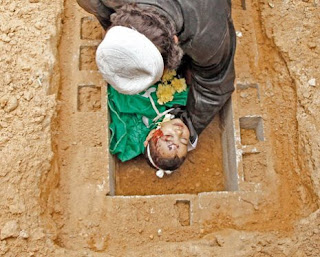 Gaza strip has been deepening down in an endless bloody round of violence. Around 120 people, 1 third of them are children killed in an obvious massacre. Below you can find some links about reports I did for some media outlets abroad. 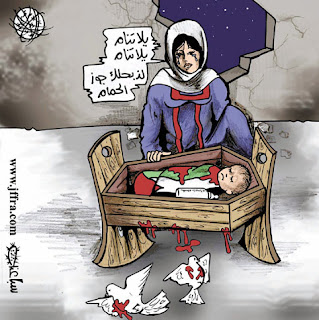 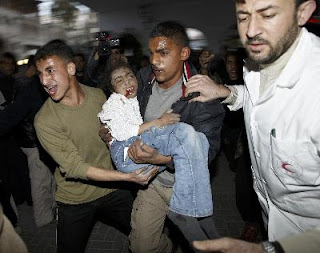 Gaza "Holocaust"?
Israeli air strikes have killed more than 30 Palestinians, including six children, in the past few days. After one rocket hit an apartment building and another one landed near a school, wounding a 17-year-old girl Israel has activated its early warning system in the town of Ashkelon for the first time. The day before, a college student was killed in a rocket attack on Sderot"The more [rocket] fire intensifies and the rockets reach a longer range, they (the Palestinians) will bring upon themselves a bigger holocaust because we will use all our might to defend ourselves," Deputy Defense Minister, Matan Vilnai told Israeli army radio. The "holocaust" is a term rarely used in Israel outside discussions of the Nazi genocide during World War II.In an equally surprising statement, Palestinian President Mahmud Abbas accused Hamas of helping Al Qaeda militants enter the Gaza Strip."Al Qaeda is present in Gaza, and I'm convinced that they (Hamas) are their allies," Mr. Abbas said in an interview with the London-based pan-Arab daily Al-Hayat.
Watch Video
Posted by يوسف أبوديّة @ Yousef Abudayyeh at 10:40 AM 1 comment: